I found the following article a few days ago in the Serbian newspaper, Politika here 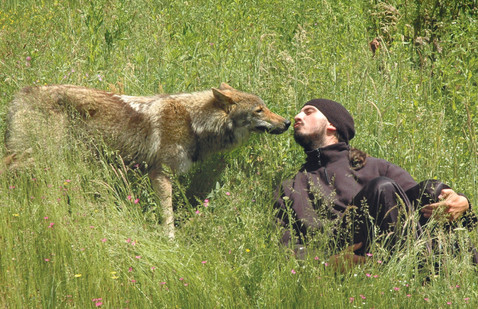 n Kovilje Monastery, at the foot of the Javor mountains, there were once many monks, during the time of the Turks there was even a monastic school here. Today, in the recently renovated late 12th century monastery, there is only one monk who, as he says, learns from wolves…

Thirty kilometeres from Ivanjica, on the right side of the Nosnica River, is also a place which resonates with an unbelievable peace and energy. We are welcomed by Abbot Ambrose (Alimpijevic), who is also the first monk after a 200 year pause  to be tonsured in this monastery. The story of his “pact with wolves” has passed outside of Serbia’s borders while the video recordings with the wolves on YouTube has been seen by tens of thousands of people.

“I am not any sort of a saint, nor wonder-worker, the whole story was understood incorrectly. I am not domesticating the animals, rather they have accepted me and I, while befriending them, have found some answers. Some things I can’t explain, they can’t be put into words,” says Abbot Ambrose.

There are only a few visitors here and one can only hear the birds and the flow of the water. Our companion says that the solitude agrees with him after the experience in Studenica (Monastery), where he spent three years.

“In Studenica I led twenty buses on a daily basis. I would go to my room in the evening, close my eyes …That’s not for me; I found peace here,” says the abbot.

Educated, clever, young, he’s only 29 years old, he has chosen a path which is not characteristic of his generation.

“A monk is a man who is wounded by the love of God. I went to the monastery when I was twenty years old and I’d do it again,” he says as he serves us coffee and rakija.

He puts his cell phone on the table.

“This is my only contact with the world or maybe I’m fooling myself,” he says with a smile and adds: “I have to have it because of the parish since I am a monk and parish priest.”

His parish is 45 kilometers in diameter. He holds services, serves liturgies, marries, buries… Just recently he married an Albanian woman and Serb which was followed by “a 24 hour wedding party”.

He was born in Arilje. He finished musical school, plays the guitar and piano. He has them here and plays every once in awhile. He sees his family three times a year, he says. His younger brother, Aleksandar, is a soccer player in Hungary. He visited him once, before the monk’s cells were finished and only commented: “what is this, only an acre of heaven…” Yes, an acre of heaven and mountains, but which have a special energy, probably because of the old church, he adds…

Next to the monks cells is parked a jeep and motorcycle. Just more proof that the young abbot  does not fit the image of a monk which is communicated only through the service.

“The jeep and motocycle I received as a gift a month ago, thanks to a show on Radio-Television Serbia which was seen by V. Rev. Milos Vesin, professor at the St. Sava School of Theology in Libertyville, Illinois. Fr. Vesin, his students and professors collected the funds for the purchase so that I might have transportation through this mountainous terrain,” he explains as he surprised faces.

[The remainder of the article I didn’t translate.] But in brief: he says the wolf, who was 15 days old when he found it, only comes by him. He nursed the baby wolf,  that he named Alpha, fist by giving it milk every four hours, then ground meat. The wolf is now 10 months old. He had another wolf that joined them on walks but that wolf now is in another city in Serbia. Besides the wolves, he has tamed a fox that comes during the night and is much more timid than the wolf; also a snake, a raven, a rabbit and a parrot.

Soon, though, he will have to let go of his friend Alpha, who will be sent to Bulgaria (to a zoo, I suppose?). When asked if he will be sad, the abbot replies that if you truly love someone you have to free them. “This is true love,” he says. “It’s hard for me, that’s understandable but we learn…slowly.”

12 thoughts on “An Abbot’s Pact with Wolves”