Taken from “The Jesus We Missed” by Fr. Patrick Henry Reardon.

THE ANGEL AND THE BLOOD 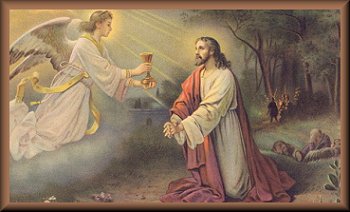 We come now to the gospel of Luke, from whom we gain the very term “agony” to describe Jesus’ ordeal in the garden (Luke 22:44). He is the only New Testament writer to use this word.

Luke omits the threefold form of Jesus’ prayer found in Mark and Matthew. His version, therefore, is shorter. It does contain, however, certain particulars not found in the other accounts of the drama in the garden.

These particulars about the bloody sweat and the comforting angel we know only from Luke. Let us consider them more closely.

First, the sweat of Jesus is a condition called hematidrosis. This pathology, which results  from an extreme dilation of the subcutaneous capillaries, causes them to burst through the sweat glands. This symptom, mentioned as early as Aristotle, is well-known to the history of medicine, which sometimes associates it with intense fear. It is not without interest, surely, that Luke, the only Evangelist to mention this phenomenon, was a physician.

Unlike Mark (14:34) and Matthew (26:38), Luke does not speak of Jesus’ sadness in the garden scene, but of an inner struggle, an agonia, in which the Savior “prayed more earnestly”.

The theological significance of this feature in Luke is that Jesus’ internal conflict causes the first bloodshed in the Passion. His complete obedience to the Father in his prayer immediately produces this initial libation of his redemptive blood, the blood of which he had proclaimed just shortly before, “This cup is the new covenant in my blood, which is shed for you” (Luke 22:20).

Prior to the appearance of his betrayer, then, Jesus already begins the shedding of his blood. He pours out in the struggle of obedience, before a single hand has been laid upon him. In Luke’s account the agony in the garden is not a prelude to the Passion but its very commencement, because Jesus’ stern determination to accomplish the Father’s will causes his blood to flow – already – as the price for man’s redemption.

Second, the angel is sent to strengthen Jesus during his trial. Luke, in his earlier temptation scene, had omitted the angelic ministry, of which Matthew (4:11) and Mark (1:13) spoke on that occasion. When Luke did describe that period of temptation, however, he remarked that the demon, having failed to bring about Jesus’ downfall, “departed from him ” (4:13, emphasis added). Now, in the garden, that time has come, and Jesus receives the ministry of an angel to strengthen him for the task.