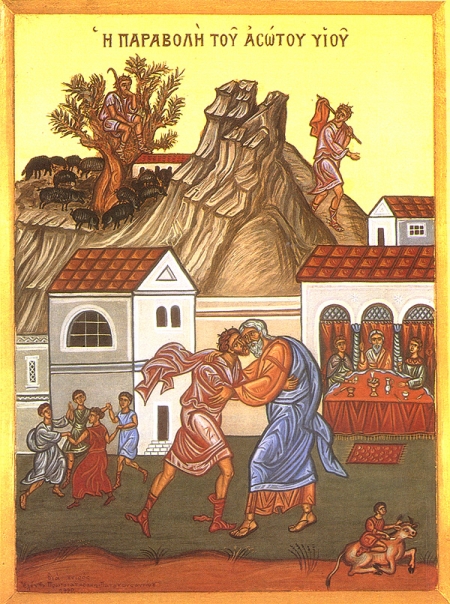 We hear this morning, just as we heard last Sunday and very often throughout the gospels how our Lord reveals to us the mysteries of our salvation, the mystery of God the Father, the mystery of the Heavenly Kingdom, through stories. The story, or parable, we heard this morning is certainly one of the most beautiful not only in the gospels but in literature in general. What’s more, it’s been read and studied by not only the church fathers but wise man, philosopher’s and great minds, throughout history. It’s the story of the Prodigal Son. Though, it’s been referred to by the church fathers at times as the story of the Merciful Father.

And indeed the son who asks for his inheritance and goes off and leaves his father’s house and wastes all of his money, ends up falling in a sort of depression until he finally comes to his senses and returns to his father’s house – this son plays the main role in the story. But he’s not the only son. There is another son, one who never leaves, who never asks for his inheritance, who remains with the father, works for him, is loyal to him, obedient to him. Yet, in reading the story one wonders which of the two sons was better than the other -the one who remained or the one who left and then returned sorrowful? What surprises us is how the son was received when he returned to the father. Not only was the father filled with joy but the entire house rejoiced. Everyone rejoiced expect for his brother who either couldn’t or refused to rejoice. It would be somewhat logical if the father was the one who didn’t rejoice. After all, the son didn’t leave his brother, he left his father.

But that’s not the case. Because while the younger son plays the major role in this morning’s story that which is major is not the fact he left his father, or wasted away his inheritance, or any other thing he did, what’s major in the role he played in this story is his repentance.

We stand before  a long journey. A journey that will lead us from the material to the spiritual; a journey that will lead us into God’s Heavenly Kingdom. And the path on that journey is called Lent. It’s seven weeks of fasting which leads us to the great Feast of the Resurrection of Christ. That we might endure this journey the Church gives us two great helpers, two essential virtues without which we wouldn’t be able to endure: humility and repentance.

Last Sunday’s gospel of the Publican and the Pharisee gave us an example of humility through the publican who recognized and admitted his sinfulness and his prayer was short and simple and effective: God be merciful upon me a sinner.

This Sunday we’re given the example of repentance. This story is told in such a way that every man can find himself in it. We can all see ourselves, in a way, like the prodigal son who leaves his father, who leaves God, who neglects prayer, who has no time to go to church, who has no patience to listen to others, no compassion help one another. We are all in need of returning to God. But the only way we can do that is through our humility – through our admitting our fault and with repentance to return. As the Lord says at one place in the gospels, I tell you that in the same way there will be more rejoicing in heaven over one sinner who repents than over ninety-nine righteous persons who do not need to repent. Repentance is powerful and so mighty it can bring people back to life. For this son of mine was dead and is alive again says the father in this morning’s parable.

These are the two virtues we need in order to embark on the Lenten journey that it might bring fruit, that our fasting and our prayers might be well pleasing to God. May the upcoming Lenten season, which begins in two weeks, be unto our salvation.

On the Night of Witches*

It is clear that we, Orthodox Christians, cannot and must not partake in such an idolatrous celebration at any level (even if it were “only” fun for kids), for it directly represents a renouncing  of our Lord and our holy Orthodox faith. For, if we allow our children to be “disguised” and let them  go in the dark and beg for sweets, we thereby voluntary accept the community of the dead, whose god is not the deity Samhain but Satan himself, the prince of evil and the sweets (treats) that they would receive will not represent an innocent gift to children but an offering to the devil himself. Let us remember that our ancestors, Christians from the earliest centuries, would first choose bodily death in the worst sufferings than they would accept a sacrifice to idols and thereby renounce Christ our God, who commanded us: HAVE NO OTHER GODS THAN ME – Saint Bishop Nikolaj

The Sts. Sebastian and Mardarije Institute held these past few days, beginning Monday evening with Vespers followed by a welcome reception and then ending last night, was something close to amazing. All in all, Fr. Maximos of Simonopetra gave a total of nine talks during the course of the three full days of sessions. During one of the discussions a question was asked about virtue. The question ran along the lines of, when we think of virtue or someone tells us about virtue we think of good deeds, feeding the poor, working soup kitchens and similar things.

In his response Fr. Maximos noted that virtue is who we are and not what we do. We grow in virtue. We don’t notice our own growth for instance. People will look in the mirror and say something like, When did I get so fat?; or, When did my hair get so grey? We don’t observe our physical growth, it’s gradual. Yet, on the spiritual field we expect to fast, take communion and go to church a few times and somewhat expect to see or feel our spiritual growth. We expect to somehow measure our spiritual maturity.  But God doesn’t allow us to see our spiritual progress. If he did we’d become prideful. There’s a story of a man who comes to his father confessor and confesses that he’s a drunk. His father confessor says to him, thank God you’re a drunk, otherwise you’d be prideful, all you’d do would be enumerate your good deeds, your fasting and how you don’t commit any sins. We can be filled with good deeds and never have the slightest inclination to get drunk, to curse, to not go to church, or whatever. Any yet at the same time our hearts can be filled with pride which, ironically, is the “mother of all sins”. Therefore, virtue is not something we do, it’s who we are. And this growth in the virtues is something we do our entire lives, it doesn’t happen to us over the weekend or forty days of fasting or whatever the case may be. As one elder said, No one dies right away, it takes your entire life to die. 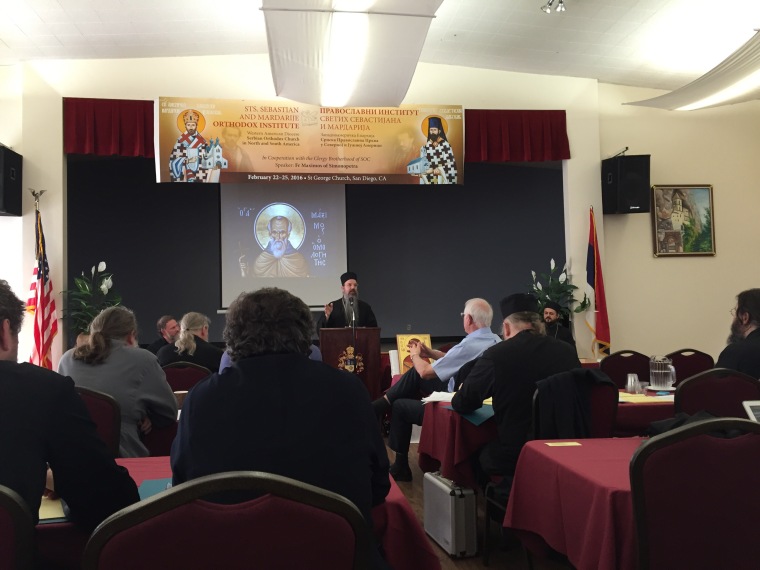 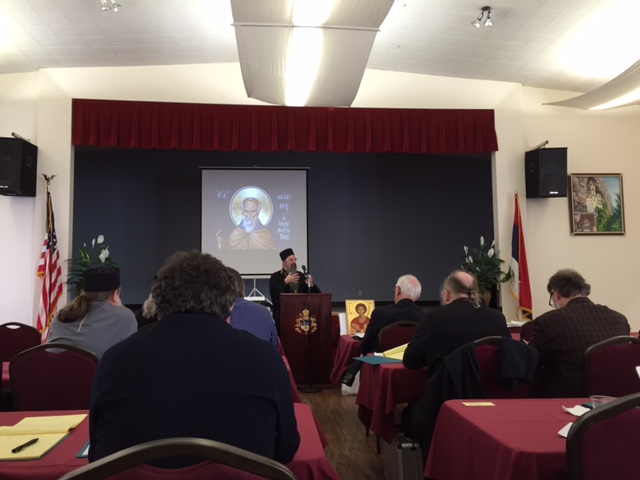 A snippet from Fr. Maximos’ The Art of Seeing, our speaker for this year’s Sts. Sebastian and Mardarije Institute in San Diego which began last night.

“…Freedom from the tyranny of the senses, however, does not mean that our aim is a kind of detached, distance looking, for this would be to commit the error of Zacchaeus, who wanted to see Jesus without being seen by him (Lk 19:1-11). Yet it is mostly from such safe distances that we too wish to see him, without opening ourselves up to his gaze, without making ourselves vulnerable to him. Seeing, of course, is a metaphor for knowing, and there is no knowledge apart from love. Thus the desire to see without being seen, to know without being known, to take without giving, stands in the same relation as love does to an act of violence. God, however, cannot be so violated, and those who will not strip and empty themselves before him go away cold and empty. But if we heed the call to “make haste and come down” (Lk 19:5), we shall find that, on the ground, in the embrace of Jesus (Lk 19:6) the world looks very different. It is no longer simply I who see, but also I who am seen. The “object” of my vision has now become a subject, it approaches me from outside myself, and draws out its implications in me. Welcomed into the presence of another, I discover that he himself is the living center of my being, and I become, in the words of St. Maximos, “like a crystal clear mirror capturing completely the whole shape of God the Word who is looking at himself in me” (PG 91:1137B). “Since we have such a hope, we are very bold; and all of us, with unveiled faces, beholding the glory of the Lord, are transfigured into his likeness from one degree of glory to another (2 Cor. 3:12,18)…..”