I found this story in Serbian and was about to translate it. John at Mystagogy (here) beat me to it.

Once on Mount Athos there was a monk who lived in Karyes. He drank and got drunk every day and was the cause of scandal to the pilgrims. Eventually he died and this relieved some of the faithful who went on to tell Elder Paisios that they were delighted that this huge problem was finally solved.

Father Paisios answered them that he knew about the death of the monk, after seeing the entire battalion of angels who came to collect his soul. The pilgrims were amazed and some protested and tried to explain to the Elder of whom they were talking about, thinking that the Elder did not understand.

Elder Paisios explained to them: “This particular monk was born in Asia Minor, shortly before the destruction by the Turks when they gathered all the boys. So as not to take him from their parents, they would take him with them to the reaping, and so he wouldn’t cry, they just put raki* into his milk in order for him to sleep. Therefore he grew up as an alcoholic. There he found an elder and said to him that he was an alcoholic. The elder told him to do prostrations and prayers every night and beg the Panagia to help him to reduce by one the glasses he drank.

After a year he managed with struggle and repentance to make the 20 glasses he drank into 19 glasses. The struggle continued over the years and he reached 2-3 glasses, with which he would still get drunk.”

The world for years saw an alcoholic monk who scandalized the pilgrims, but God saw a fighter who fought a long struggle to reduce his passion.

Without knowing what each one is trying to do what he wants to do, what right do we have to judge his effort?

* Raki is a Turkish unsweetened, anise-flavored hard alcoholic drink that is popular in Turkey, Greece, Albania, Serbia, and other Balkan countries as an apéritif. 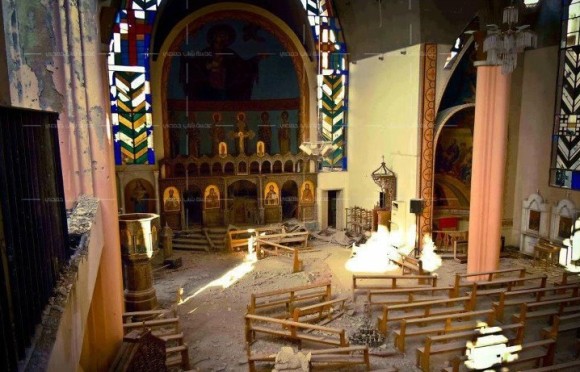 A photograph provided to us by a Christian woman in Homs, scene of some of the bloodiest clashes of the conflict, shows a member of the Free Syrian Army posing with a looted Catholic cross in one hand and a gun in the other while wearing a priest’s robe.

“Everyone knows simply removing these garments from the church is a sin. The priest is the only one who wears them too. They even pray before putting them on. Him posing in front of the funeral car as well is disgusting to the max,” our source told us.

“They destroyed the church and went in to film it. I know this for a fact.”

“The Robes can only be worn by Deacons or Priests or Sub-Deacons, and they a Christian man wouldn’t hold a Cross in one hand and a gun in another,” the woman adds 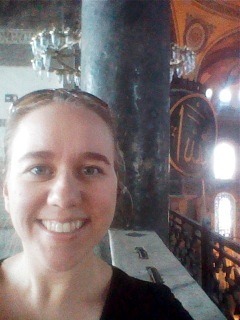 My wife came back from her trip to Constantinople and the Holy Land yesterday, safely, thank God. She arrived very early in the morning, in the middle of the night actually, after traveling over 32 hours, with all the flight delays. Her luggage, unfortunately was not with her. Instead it came last night. And with it came all the scents and tastes from the Holy Land. As you see below she brought with her myrrh from the tomb of St. George, wine from Cana, oil from the lampadas of the Holy Sepulchre and Golgotha, water from the Zoodochos Pigi- Font of the Life-Giving Spring and the Jordan River- among other places- and (not pictured) a cutting of the authentic Burning Bush and a piece of the plaster from Hagia Sophia. 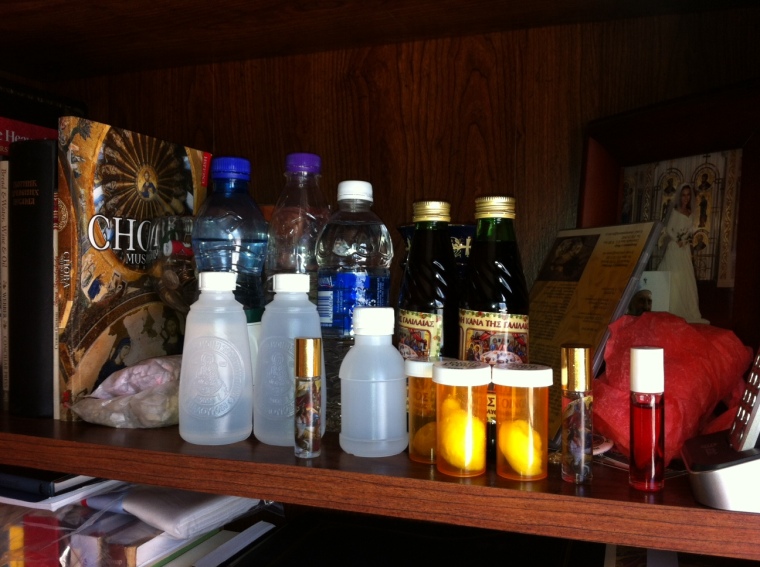