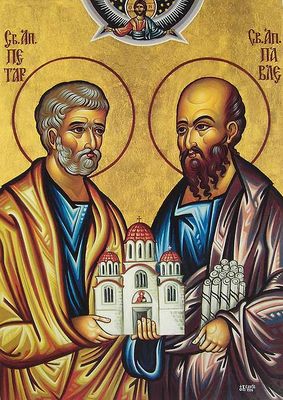 Matthew 16:13-20: This text presents the definitive answer to one of the major questions of this gospel, the true identity of Jesus: “You are the Christ, the Son of the living God.” Because this confession of faith was (and still is) regarded as the foundation stone of the Christian Church, the nickname “Rock” (perhaps closer to “Rocky” in English) was given to the man who made it, Simon Bar Jonah (or, in English, “Simon Johnson”). It was in Simon’s fishing boat that Jesus was earlier confessed to be “truly the Son of God” (14:33), so that his boat becomes in the gospels a great symbol of the Church. The great prominence of this “Rocky Johnson”(Kephas in Aramaic and Petros in Greek) among the Twelve Apostles is indicated by the fact that his name appears first in every single New Testament list of the Twelve. Those early churches most closely associated with the Apostles Peter and Paul enjoyed a singular eminence and spiritual authority among all the early Christians. Chief among them were the churches at Antioch and Rome.

As we see by comparing this account to Mark 8:27-30, the early preaching and narrative tradition of the Church “fixed” this event at Caesarea Philippi. It is rare in the Gospels for an individual event to become so fixed in this way.

Caesarea Philippi is situated on the southern slope of Mount Hermon, which is the highest peak in Palestine. Near it are the pools of Benaias, one of the chief sources of the Jordan River. The name Benaias is derived from the god Pan, and the name of the city, Panion, was changed to Caesarea when Herod’s son, Philip, rebuilt it and dedicated it to Caesar Augustus. The name Caesarea Philippi thus refers to both men, Caesar and Philip.

The reader observes that the question of Jesus—“Who do you say that I am?”—is differently phrased among the three Synoptic Gospels. In Matthew the question is also a matter of auto-identification; there is the presumption that Jesus is the Son of Man.

Such is the determining inquiry—the true identity of Jesus of Nazareth—the proper determination of the Who that poses the question itself. The history of the seven Ecumenical Councils of the Christian Church illustrates that all other doctrinal questions are reducible to this one question: Just who is Jesus?

Earlier, Matthew had touched on the suspicion that Jesus was really John the Baptist returned to life (cf. 14:1-2). He returns to it now (verse 14). We should find it significant that some of the Lord’s contemporaries resorted to prophetic history as a way of explaining Jesus. He resembled the prophets more than anyone else they could think of. Elijah, after all, had never really died, and his return was still expected (cf. Malachi 3:1,23).

Matthew also includes Jeremiah, whom he regarded as a “type” of Christ. Besides here, Jeremiah is mentioned by name two other times in Matthew (cf. 2:17; 27:9). In addition, Matthew several times alludes to Jeremiah, who is clearly one of his favorites.

When Jesus addresses the view of the disciples themselves (verse 15), it becomes clear that what is sought is the identity of Jesus Himself. The “you” in this question is plural and emphatic. That is to say, the disciples are being contrasted with everyone else. The distinguishing mark of true discipleship is the perception of who Jesus is.

Although all the disciples are addressed, it is Simon who answers (verse 16), as the spokesman for all the apostles. Throughout the Gospels he is the only one who ever serves in this way.

Peter’s confession itself is far more ample, precise, and developed here than in Mark and Luke, and it corresponds more closely to the full Christological confession of the Christian Church. It confesses a great deal more than Jewish Messianism (Compare 21:37-38; Hebrews 1:1-2).

To appreciate the Matthean expansion (verse 17), it is useful to compare it to the Markan sequence. In Mark’s version, Peter’s confession leads directly, without interruption, to Jesus’ reprimand of Peter. In Matthew this sequence is completely abandoned, and Jesus first blesses Peter. What Peter confesses cannot be humanly known; it transcends “flesh and blood” (cf. 11:25-27—observing the same verb, “reveal”). What we have here is a description of the faith of the Church (cf. 2 Corinthians 4:6).

Such is Jesus’ assessment of the answer Peter gives to His question, “Who do you say that I am?” The orthodox answer to this question is the matter of divine revelation. The confession follows the vision. The Church testifies to what She knows.

When Peter identifies Jesus, Jesus identifies Peter (verse 18). This identification is very important, because it has to do with the foundation of the Church. We have already learned in Matthew (10:2) that Simon’s nickname was Kephas, meaning “rock.” This nickname comes into play as the foundation stone of the Church. Indeed, this is the first of only three times—all of them in Matthew—that the word “Church” is found in the Gospels. What Jesus says is, “You are the Rock, and on this Rock I will build My Church.” What does this mean?

First, the pronouncement is related to Peter’s Christological confession. The rock on which the Church is built is, first of all, the confession of Jesus’ true identity as Son of the Living God. The Lord’s pronouncement to Peter, therefore, must not be separated from Peter’s confession of Jesus as the Son of God. That confession is the foundation stone on which the Church is built. This was, it would seem, a common metaphor. Indeed, this is how St. Peter himself interpreted the Lord’s words here; cf. 1 Peter 2:4-8 (also 1 Corinthians 3:11).

The first meaning of the Rock, then, on which the Church is to be built, is Christological. It is the confession of Jesus as the Christ and the Son of God.

In addition to this meaning, does the identification of Simon as the rock of the Church have some reference to his specific ministry in the Church? Perhaps it does. While the first meaning of the rock has to do with Christology, the New Testament knows a secondary and dependent meaning—the apostolic and prophetic ministries (cf. Ephesians 2:19-22). We also observe an “apostolic” meaning for the image of the rock in Revelation 21:14. This is later reflected in the Creed’s description of the Church as “apostolic.”

This secondary meaning, if it is (as I believe) intended here, is inseparable from the Christological meaning. That is to say, the Apostles are the rock of the Church in the sense that they are the authoritative witnesses to, and proclaimers of, the true identity of Jesus.

This is the reason why some of the Church Fathers understood Peter, in this text, to represent the bishops of the Church, because the bishops were (and still are) regarded as the legitimate successors of the Apostles. It is well known that this was the interpretation of St. Cyprian, the 3rd century bishop of Carthage, for instance.

Even if we do not follow Cyprian’s lead in this interpretation, it is important to stress (because Matthew does) the ecclesiastical—the institutional—aspect of this verse. Peter’s confession is not an individual taking of Jesus as his personal Lord and Savior. Peter here is the spokesman for the Church and makes the Church’s profession of faith.

The words that follow (verses 18-19) indicate that this authority is not given to Peter solely. As St. Cyprian of Carthage observed with respect to this text, Peter speaks as the representative all of the apostles, so that what Jesus says to Peter He says to all of them. Likewise, the authority here conferred on Peter is conferred on all the Apostles. This is why, as Cyprian also observed, what is said here to Peter in the singular is later said to all the Apostles in the plural (18:18,27).

The metaphor of the key comes from Isaiah 22:20-25, which describes the installation of Eliakim over David’s royal house. These words apply to the Apostles in God’s house, and the authority thus conferred indicates a wide discretion; making rules (canons) and making exceptions to them, imposing and absolving from excommunications, forgiving and not forgiving sins (cf. John 20:23). We observe an example of the exercise of such authority in 1 Corinthians 5:1-5, a case involving elementary Church discipline. We note that Paul speaks with the serene sense of authority to bind and loose. This text in Matthew means, then, that the Lord will support and back up the authority exercised in His name in the Church.

Since this promise to Peter is not found in Mark and Luke, it is worth inquiring where it was preserved, so as to end up in the Gospel according to Matthew. It is interesting that these words of Jesus do not appear in Mark, which was the specifically Roman Gospel, reflecting the preaching of Peter at Rome. The promise appears, rather, in Matthew, associated with the Church in Syria, and perhaps more specifically with Antioch, where Peter was important in the founding of the local Church. If the promise to Peter is to be understood as applicable to one local church in particular, that church would seem to be the one at Antioch.

2 thoughts on “Peter’s Confession, the metaphor of the keys and the church of Antioch”